Tectonic Setting of the Eastern Margin of the Sino-Korean Block in the Pennsylvanian: Constraints from Detrital Zircon Ages SCIE SCOPUS

Title
Tectonic Setting of the Eastern Margin of the Sino-Korean Block in the Pennsylvanian: Constraints from Detrital Zircon Ages

Abstract
To test the previous hypothesis that upper Paleozoic sediments in the eastern Sino-Korean Block were mostly derived from the paleo-orogen located to the east, we compared published and new U-Pb age data of detrital zircons from Pennsylvanian strata distributed in the Sino-Korean Block (SKB). The age distributions of detrital zircons from different localities of Pennsylvanian strata in North China reflect varying contributions from the Inner Mongolia Paleo-uplift in the north and the Central China Orogenic Belt in the south. The supply of detritus from the northern source to distant areas, however, appears to have been limited during the Pennsylvanian times. The age distributions of detrital zircons from Korean Pennsylvanian strata located in the east of the SKB are characterized by a dense cluster of 1.84-1.90 Ga and differ from those of North China. The Korean age characteristic is best explained by strong influences of the detritus derived from the Paleoproterozoic Yeongnam Massif in southeastern Korea. Along with the significant number of zircons that record syn- to near-depositional magmatic activities, this observation supports the hypothesis of the existence of an active continental margin setting in the east of the SKB. 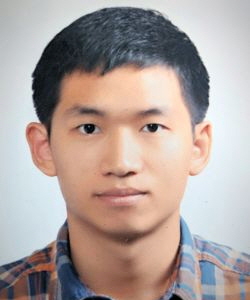