Abstract
Vertical distribution of suspended fecal pellets (SFP) in water column and production of copepod fecal pellets were studied in the Ulleung Basin, East/Japan Sea in July 2005 and April 2006. An anticyclonic warm eddy existed in the center of the basin in 2005 and 2006. In 2005, the eddy was stratified with a seasonal thermocline and in the center of the eddy a strong subsurface chlorophyll maximum (SCM) was developed at 40m depth. The water column stratification, however, showed different pattern between stations: D2 (no stratification) and D4 (initiation of seasonal stratification) in 2006. Experiments were made at two stations: D2 (at the periphery of the eddy in both years) and D4 (inside the eddy in July 2005, at the periphery of the eddy in April 2006). The SFP at D2 and D4 peaked at 30m depth without clear difference between the day and night sampling in 2005. The SFP in 2006, however, showed different distribution between stations: D2 (no difference between the day and night sampling and homogenous distribution of SFP within 100m depth) and D4 (SFP peaked at 10-30m depth at night and at 100m depth at day sampling). The mean production rates of fecal pellets by copepod community was estimated 0.57 mgC/m3/day (or 115 mgC/ m2/ day in the upper 200m) in July 2005 and 0.43 mgC/m3/day (or 96.2 mgC/m2/day) in April 2006. Copepods Paracalanus copepodites dominated in the mesozooplankton sample in abundance in both years, followed by Clausocalanus copepodite and Paracalanus parvus in 2005 and Oithona similis, Oithona copepodites and Pseudocalanus newmani in 2006. 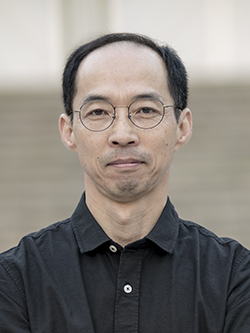