Abstract
The biological carbon pump in the southwestern East Sea (Japan Sea, EJS hereafter) was investigated based on examination of sinking particulate matter samples intercepted by bottom-tethered sediment traps deployed on a mooring at three depths (500, 1000, and 2000 m) between 2011 and 2017. The total particle flux increased as the sampling depth increased, while particulate organic carbon (POC) flux was greatest at 500 m. The lithogenic material content was high at all depths, and accounted for an average of similar to 42% of the particulate matter. The total particle flux at all sampling depths consistently shifted toward much higher values in 2014-2016. During this period, the POC flux at 500 m increased by 32% while net primary production (NPP) increased only slightly. Consequently, the POC flux/NPP ratio increased significantly, indicating greater biological pump efficiency than in earlier years of the study. The flux of lithogenic material derived primarily from sediment resuspension was much greater at 500 m in 2014-2016 compared with previous years, implying its potential role as a ballast mineral in enhancing particle export and transfer to the deep sea interior. The radiocarbon isotope ratio of POC was higher, and the excess Mn content values were lower at 500 m in 2014-2016, suggesting that the resuspended sediment at 500 m likely originated from a shallow region during this period, and differed in provenance from the lithogenic material intercepted at 2000 m. The period of enhanced particle flux coincided with the 2015/16 El Nino and a mesoscale warm (anticyclonic) eddy that persisted for 2 years in the study region. The East Korean Warm Current and the eddy may have facilitated the transport of resuspended particles entrained in the Korea Strait and/or the western shelf and upper slope of the basin to the study site. 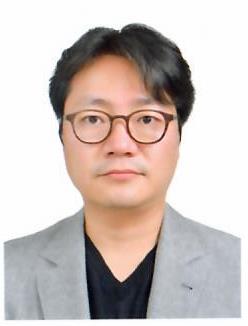